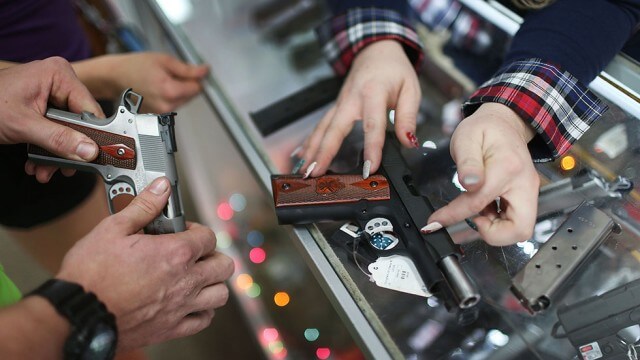 Lisa Folajtar is being denied her Second Amendment protected right to keep and bear arms because of a 10-year-old conviction.  In 2011, Folajtar pleaded guilting to willfully making false statements on her tax returns—a federal felony punishable by up to three years’ imprisonment.  Folajtar was sentenced to three months of home confinement, three years’ probation, a $10,000 fine, and a $100 assessment.  She paid back taxes, penalties, and interest to the IRS amounting to approximately $250,000. She paid the penalty for her misjudgment and has lived the life of a model citizens since then. But because the nonviolent felony Folajtar was convicted of carries a maximum penalty of more than one years’ imprisonment, she is prohibited—for life—from possessing a firearm by federal law.

Ten years ago, in 2011, Lisa Folajtar pleaded guilty to making false statements on her tax returns. She was sentenced to, and completed, three months of home confinement and three years’ probation; she also paid a $10,000 fine and a $100 assessment. She paid back taxes, penalties, and interest to the IRS amounting to approximately $250,000.

Folajtar is not a dangerous or violent person. She’s led the life of an upstanding citizen since that conviction. But when Folajtar years later sought to purchase a firearm to keep in her home for self-defense, she couldn’t do so. Under current federal law, because her false statements felony carries a maximum penalty of more than one years’ imprisonment, she is prohibited from possessing a firearm under 18 U.S.C. § 922(g)(1).

In response, Folajtar filed a lawsuit in federal court, arguing the prohibition based on her nonviolent felony conviction violates the Second Amendment and is thus unconstitutional.  The federal district court disagreed, determining that Folajtar’s crime was “serious” enough that she belongs among the “unvirtuous” Americans who can be prohibited from possessing arms for the rest of their lives.

Nothing in the history of the Second Amendment, however, allows the government to prohibit firearm ownership based on “virtue” or “seriousness.” Instead, based on the Second Amendment and Founding Era regulations, the federal government can only prohibit dangerous persons from possessing arms.  At the time of our Founding, these were most commonly people who were supporting or actively aiding the British Empire or engaged in violent insurrection.

Folajtar appealed to the Third Circuit Court of Appeals, which affirmed the district court.  “By making a tax return that she knew to be false, Folajtar willfully deprived the Government of its property,” reasoned the The Third Circuit. Folajtar has now petitioned to the U.S. Supreme Court to right this wrong; and Mountain States Legal Foundation’s Center to Keep and Bear Arms filed an amicus curiae brief with the Supreme Court to support her call for justice.

Numerous sound, stable, trustworthy individuals, such as Folajtar, are denied their constitutionally protected right to keep and bear arms in defense of their homes, merely as the result of nonviolent convictions without any consideration of the particular circumstances of the individual.

The federal government is arbitrarily denying Folajtar her rights, along with an entire class of people just like her. MSLF’s Center to Keep and Bear Arms is arguing that, based on the original public meaning of the Second Amendment, the Court must restore to Folajtar, and others like her, the natural and fundamental right to keep and bear arms, as guaranteed in the Constitution.